Raisins produced from Thompson seedless sultana grape variety They are directly sun-dried in the open air on cement slabs and a very dark-brown color. Raisins are dried grapes, with the drying process taking about 15-20 days. Evidence has shown that raisins were produced by the Egyptians as early as 2000 B.C. 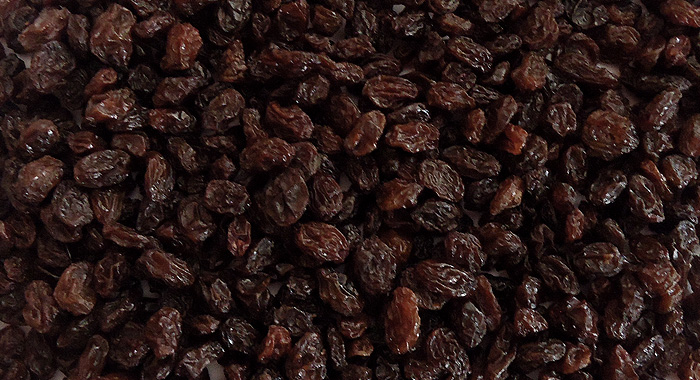 Seedless grapes used to make raisins first came from Turkey. In the Aegean Region of Turkey, since the 18th century the major grape production is sultanas, which is a variety of seedless type.

During the late 1800’s Spanish missionaries from Mexico introduced grapes to the USA. These early vineyards were primarily used to make wines, however in 1873 when the vineyards discovered they could make quicker profits by making raisins, the raisin industry was born.

Turkish Thompson Raisins are very popular in world markets with it’s similar taste and odour to Californian style although it’s reasonable prices. This variety is called “Undipped Raisins” as well as they are not dipped to alkaline olive oil emulsion (Potasa) before sun drying which makes the drying period longer than conventional products. Köksal Özer supplies Thompson raisins on a regular basis during the season to it’s wide customer range in the world markets.

The products consists of good, sound berries, typical of the current crop which have been sun dried and stored under satisfactory conditions before processing. The dried fruits are graded and received by Köksal Özer experts and stored in Köksal Özer warehouses under controlled conditions. The fruit will be sized, destemmed, screened, washed in potable water, aspirated and static picked to remove defects and foreign materials.

Recommended to store in a cool, dry, clean and well ventilated environment away from strong odours. Ideal storage temperature is between 10-15 degrees Celsius, with relative humidity below 50%.