Sultanas are produced from varieties of seedless grapes, dried to concentrate their rich flavour. Larger than currants but smaller than raisins. The sultana (also called the sultanina or sultaninini) is a type of white, seedless grape of Turkish, Greek or Iranian origin. In some countries, it is also the name given to the raisin made from it; such sultana raisins are often called simply sultanas or sultanis. These are typically larger than the currants made from Corinthian grapes, but smaller than "normal" raisins. Sultana raisins have a delicate and unique flavour and are especially noted for their sweetness and golden colour. 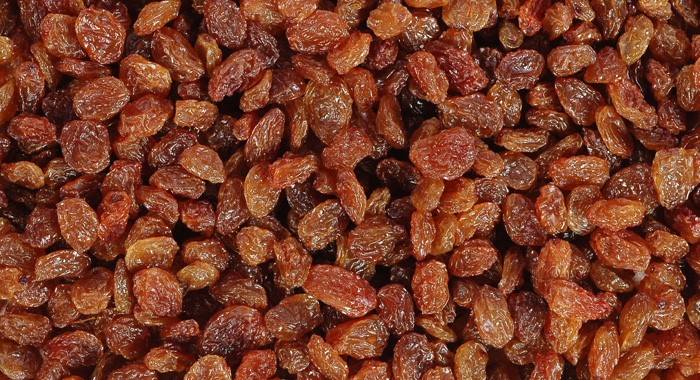 The sultana differs from the raisin in two ways, one of which is fairly apparent. It is lighter in colour – the lighter the better, in quality terms – but it is also the sun-dried grape of one variety alone, the green, seedless Sultana grape of ancient (possibly Persian) lineage.

The sultana raisin was traditionally imported to the English-speaking world from the Ottoman Empire. According to popular folklore from the Empire, the sultana was invented when the Sultan left his grapes in the sun after fleeing a tiger attack, hence the name sultana, from the feminine form of sultan.

The sultana raisins are classified into five types under the type numbers of 7, 8, 9, 10, 11 where 7 has the darkest and 11 has the lightest color. The raisins are divided into five sizes jumbo, standard, medium, small and small small according to their largeness being.

Köksal Özer manufactures sultana raisins according to the higher global specifications and the final product shall consist of clean, fully developed raisin berries of a general golden appearance. Sultana berries shall be free flowing and facial matter shall be present. In the production stages, raisins are double washed, elaborated, stemmed, capstemmed, brushed, sized, mechanically cleaned and then taken to laser scanning and X-Ray sections. No foreign odours or flavours shall be presented.

Recommended to store in a cool, dry, clean and well ventilated environment away from strong odours. Ideal storage temperature is between 10-15 degrees Celsius, with relative humidity below 50%.